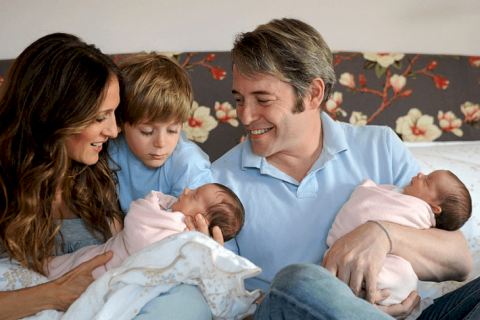 The top-liner of the series "Sex and the City", a recognized style icon in the fashion world, a successful perfumer and designer, actress Sarah Jessica Parker and her husband, actor and singer, winner of two «Tony» awards, Golden Globe nominee of Matthew Broderick, dreamed of becoming a large family and their wish became true thanks to surrogacy. The dream of the famous family was embodied by a surrogate mother from Ohio Michelle Ross. Sarah Jessica Parker described her as "a strong, vibrant and independent woman."

A surrogate mother gave birth for two adorable little twins Marion Loretta Elwell and Tabitha Hodge. Sarah Jessica and Matthew also have the eldest son, James Wilkie, whom the actress gave birth to on her own at 37. But, unfortunately, despite an imperative will, she was no longer able to have children. Attempts and false hopes brought nothing but disappointment to the family, and it also resulted a reason for a crack in the couple's relationship. Sarah Jessica Parker renounced the surrogacy option for a great period of time, but eventually she had to make this step as it was the only way for the family to find the joy of babysitting. Applying to critics of surrogate motherhood, the owner of a slim figure Sarah Jessica Parker has repeatedly emphasized in her statements that she didn’t resort to the services of a surrogate mother with a purpose of saving her figure.

When the actress was asked who she would like to give birth to, she replied that, of course, a girl, and preferably two. Firstly because, as we know, the couple already had a boy, and secondly, as Parker said, there must be someone who would inherit her favorite Manolo shoes, Judith Leiber handbags and hundreds of other things that fill three dressing rooms.
Like her heroine from the TV series "Sex and the City" Carrie Bradshaw, Sarah Jessica Parker is very passionate about fashion, that’s why her images are always on top, the actress and a talented designer never ceases to amaze with her impeccable style. The celebrity launches his own clothing and perfume line, and also lectures in the fashion industry for future fashion designers. As for the series "Sex and the City" itself, it ended in 2004, but there is no doubt that it will be revisited many years later by women who will be inspired by Carrie Bradshaw.