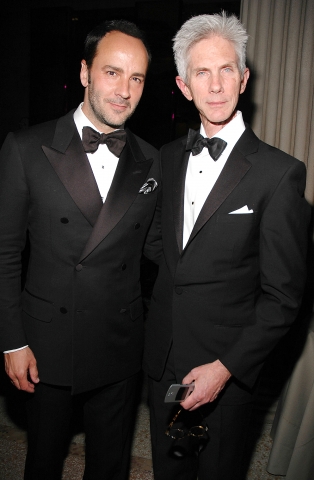 Prominent and incredibly talented designer and director Tom Ford and his journalist partner, former editor in chief of Vogue Hommes International, Richard Buckley have been together for 34 years. This is a real example of true love that is not often found nowadays. As Tom Ford reminisces, since the very first evening of communication with his future soulmate, it seemed to him that he knew everything about Richard and that he had known him all his life. Tom was completely mesmerized by the amazing color of Richard's eyes, calling them the wildest in the world, like an Eskimo from Alaska, almost silver in color. When they first met, Richard was 38 years old, at the time he was the editor of the magazine "Women's Wear Daily". The meeting took place in 1986 at a fashion show in New York, when Tom was working for the Gucci house. As Tom says, Richard was so handsome and self-confident that he seemed completely inaccessible, and his gaze made the designer get confused and run into the street to avoid colliding with him. Tom was then only 25, but despite the age difference, fate brought them together and they continue to live in peace and harmony, supporting each other in everything, especially in such difficult moments when Richard was diagnosed with cancer.

Of course, like any other family, the famous homosexual couple has long dreamed of having children, and the only solution was surrogacy. In 2012, in one of the Los Angeles clinics, a surrogate mother gave birth to their son Alexander John Buckley Ford, whom the couple simply calls Jack. The kid was immediately declared the most stylish boy in America. The designer said he did not want his son to become a press tool and that he would try to save him from life under a microscope. Despite the fact that Tom Ford tries to keep his family life a secret, in an interview he even shared that he happily takes on the entire routine of childcare and practically does not use the services of outsiders. The father talked about how important personal contact with the child is for him, when the boy was still quite an infant and now the director spends a lot of time in the company of his son.

So the surrogate mother brought even more love and happiness to the indestructible union of Tom Ford and Richard Buckley, making their family more complete and giving them the opportunity to enjoy fatherhood and the joy that came with it.