Daughters of Jimmy Fallon and Nancy Juvonen were born through surrogacy 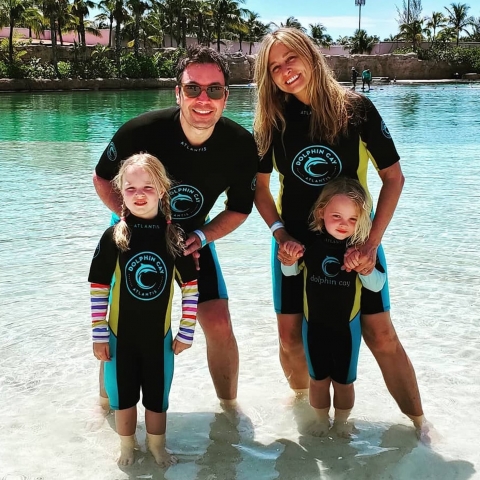 American comic actor, musician, screenwriter and TV presenter of his own program The Tonight Show Starring, Jimmy Fallon and his wife, screenwriter and film producer Nancy Juvonen, have become parents twice thanks to surrogacy. The couple dated for seven months and got married in 2007. Their first daughter, Winnie Rose Fallon, was born to by a surrogate mother in 2013. At a time, Jimmy was 40 years old, while Nancy was 47. The couple waited six years for the birth of their first child, after acquiring some experience in surrogacy motherhood, they decided to keep up with the birth of their second child, and in 2014 with the help of a surrogate mother, their second daughter Frances Cole Fallon was born... Jimmy Fallon commented in an interview that he and his wife had been trying to have children for a very long time and went through countless different ways, but surrogacy was the only way out for them. Star parents never tried to hide that their children were born precisely thanks to this process, and also immediately shared photos of their children on Instagram. Possessing an excellent sense of humor, the talented presenter chose funny costumes for photographing newborns and the little ones instantly became popular.